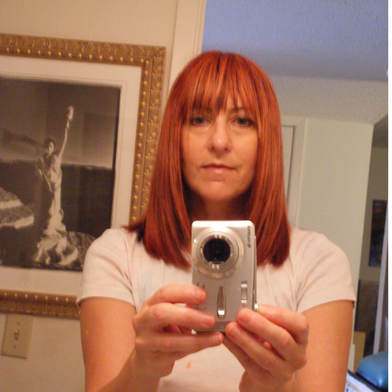 I am an artist motivated by contemporary culture and the rapid pace in which we continually absorb information and images.
"​Codified/ Code Defied", focuses on how visual information hits our retinas and how images are reduced, rearranged, and interpreted by thought. If something is left out of a story or an image, our brains automatically fill in the rest. This filling-in-the-gaps-response is an interesting area to think about visually, as in how each person perceives images differently, so too is the way we fill in the gaps and negative spaces.

I arrived at the series after a few years of experimenting with abstract figurative work and playing with contrasts of flat and modeled areas. Then one day my printer ran out of ink and left skipping color striations across the page. Most people would have tossed out the paper, however, I felt a surge of inspiration. The image presented was both abstract and figurative and reflected life in our world right now: fast paced, technology driven, fragmented, mysterious and captivating.

From there, I began distilling photo references- most of which I have taken, into vertical lines of paint. Form and value seem to be ironed out, while simultaneously standing up in space. To create tones and volume using vertical lines has been an interesting adventure in paint. Beneath the surface appeal, I am examining ideas on documentation, fragmentation and coding systems. These concepts are contrasted in luscious palettes of ice cream colors that flourish in slice of life contemporary scenes.

Leslie Pierce is a contemporary artist, known for art that focuses on themes involving coding systems, documentation, fragmentation and technology. Her ongoing series, "Code Defied" (2013- ), evolved from contrasting flattened and modeled forms of the human figure. While printing reference images, her printer ran out of ink and printed striations of color and fragmented parts of an image. This lead to an a-ha moment. The traditional way of painting is changed as Pierce employs vertical lines to generate value, form, space, time and place.  Form and value seem to be ironed out, while simultaneously standing up, suspended in time.

Leslie is honored to have one of her pieces in the permanent collection of The Harry Ransom Research Center at The University of Texas at Austin, and has been awarded several Special Projects grants to expand her work. While living in Austin, she curated and organized group exhibits, taught Encaustic Painting, and Contemporary Figure Painting and Drawing for the Austin Museum of Art’s Art School at Laguna Gloria and hosted a Life Drawing and Painting group for Austin Visual Arts Association in which she was a member and volunteer. She now paints at her studio in Arts District Liberty Station in San Diego and is selling her art internationally.

Born in New York, Leslie spent part of her childhood playing inside the Museum of Natural History, behind the scenes where her father worked as a scientist. Studying the exhibited dinosaur bones and life sized dioramas in the museum, influenced her way of seeing the world and began her continued love of art and artifacts.

Leslie relocated from Austin, TX to San Diego, CA and runs a Studio Gallery in Arts District Liberty Station- an old converted Naval base that is bustling with creative businesses, non profits and eateries. She exhibits and sells her work internationally and teaches Painting and Drawing.

To see her Exhibition history and Bibliography, click here.

The "Code Defied" series is an original series that Leslie began in 2013, while living in Austin, Texas. Since relocating to San Diego the following year, Leslie continues to grow this unique series. Please, check back for updates and Artist Leslie Pierce News.